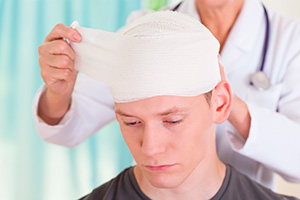 A brain injury can affect a person in a number of ways, including physically, of course, but also emotionally and/or behaviorally. Some brain injuries happen at or during birth, but most happen later and are caused by an illness or a trauma of some kind. A brain injury usually falls into one of two categories, traumatic or non-traumatic, depending on the circumstances. In any case, our Milwaukee Brain Injuries Attorney can assist you in the legal process and help you navigate through your case.

Traumatic brain injuries (TBI) often do not happen along with an open head wound or a skull fracture and there is not always even a loss of consciousness. Among the most common causes for TBI include:

Among the most common symptoms of a brain injury include:

One aspect of the seriousness of a traumatic brain injury (TBI) that anyone suffering one should realize is that such injuries often don’t heal the same as injuries to other parts of the body. In fact, the overall impact of a serious TBI can result in a lifetime of severe pain and potentially expensive medical care.

The good news is, most TBIs are preventable. For example, when you always wear your seatbelt while driving or riding in a car can significantly reduce the likelihood of head trauma in an auto accident. Likewise, if you have a job in which a slip and fall could result in head trauma, wearing the proper footwear and a hardhat can reduce the likelihood of a TBI significantly. This is why workers are required to wear proper safety gear as required by regulations from the Occupational Safety and Health Administration (OSHA); those who do so are far less likely to suffer a TBI than workers whose employers are not compliant.

What Are the Possible Effects of a Traumatic Brain Injury (TBI)?

Most of the time, a TBI is an acute event that seems similar to other injuries at first, even an injury to the brain can have an effect that goes well beyond that of most other injuries. There are many ways in which our brain defines who we are, for example. The brain also controls functions in the rest of our bodies, so it is possible for a traumatic brain injury to affect virtually everything, both physically and mentally. Unlike a broken leg, which can leave us with a limp, or a punctured lung, which may make breathing difficult for a time, no two TBIs are necessarily the same. It is possible for two people to suffer a traumatic brain injury under the same circumstances and experience symptoms in two completely different ways. For some, symptoms can appear immediately, while
others may not even realize they’ve been injured until days, weeks or months later.

That is why TBIs are sometimes missed by emergency doctors. In part, because the medical team in the emergency department (ED) is so focused on saving the life of the accident victim, they sometimes miss brain injuries. Medical technology and knowledge have improved in recent years, which means most medical professionals are capable of using respirators to control breathing and they are able to relieve the pressure caused by the fluid surrounding the brain. That has reduced the death rate from traumatic brain injuries, but the overall physical effects of a TBI are significant.

There are two types of traumatic brain injuries; mild and severe. A TBI is often considered mild if the loss of consciousness and/or the resultant confusion and
disorientation lasts less than 30 minutes. Of course, those who suffer even a mild traumatic brain injury can suffer cognitive problems such as headaches, confusion, memory lapses, attention deficit disorder, frustration, mood swings, and frustration. These types of TBI are too often overlooked, even though the effect on the injured party and their loved ones has the potential to be devastating.

A severe TBI is one associated with loss of consciousness for more than 30 minutes and significant memory loss following the injury. It can also refer to a penetrating skull injury that lasts longer than 24 hours. The problems stemming from a severe TBI can range widely, from mild impairment to high-level cognitive functions to a comatose state. Those who survive a severe TBI may experience impaired speech function and/or emotional or mental problems, as well as limited limb function. In fact, the range of symptoms resulting from such injuries varies greatly among individuals, as does the degree and length of a possible recovery.

If You Hit Your Head, Always Have it Checked Out

The most important thing to understand is that the effects of a traumatic brain injury can have a significant effect on your life and that of your loved ones, and changes can be life-altering. For many accident victims who have suffered a severe TBI, it is often necessary to undergo long-term rehabilitation as a way to maximize function and independence. In many cases, the negative effects of a brain injury may linger and they may, in fact, become permanent.  Any significant alteration of brain function can have a dramatic impact on an accident victim and their family, including their ability to do their job, as well as social and community interactions.

A traumatic brain injury may seem to be no big deal at first, and it can seem to heal like every other injury. However, a traumatic brain injury can change your life and change the lives of everyone around you. A TBI can have a major impact on every aspect of your life, so it’s not something to ignore. If you have been in an accident and hit your head, you should immediately see a doctor and make sure your brain is healthy and working well. Then, if the results are not great, hire a Milwaukee brain injuries attorney and file suit against those responsible for your injuries. You shouldn’t have to pay for injuries caused by someone else and you should never have to deal with insurance companies and opposing attorneys alone.

The experienced and knowledgeable attorneys at Welcenbach Law Offices are familiar with the intricacies involved in representing accident victims who have suffered a brain injury due to the actions of a negligent party. We will fight for you to get the compensation you deserve. Our attorneys will not take any fee until your case has been won, and we offer free consultations where you can discuss your case with a qualified member of our team who can offer advice and determine whether you have a case.